KARACHI: Until the 2013 elections, Karachi had 20 national seats — from NA-239 Karachi West to NA-258 Malir-cum-Karachi West. But in the recent delimitations, the city has gained one more seat, raising the total count to 21. This new seat is NA-252 Karachi West-V, which comprises Manghopir subdivision and some parts of Mominabad subdivision.

Mominabad was included in then NA-241 Karachi West-III, and some areas of the current NA-252, Gulshan-i-Zia, Ghaziabad and others, were also in NA-242 Karachi West-IV. Gulshan-i-Maymar, which is now included in NA-252, was part of NA-253 Karachi East-cum-Malir.

Previously, the constituency was overwhelmingly merged with the Orangi area of Karachi, which is mostly inhabited by the Urdu-speaking community. However, after the recent delimitation, the entire Manghopir subdivision is in the newly carved constituency, whose 60 per cent area is rural. 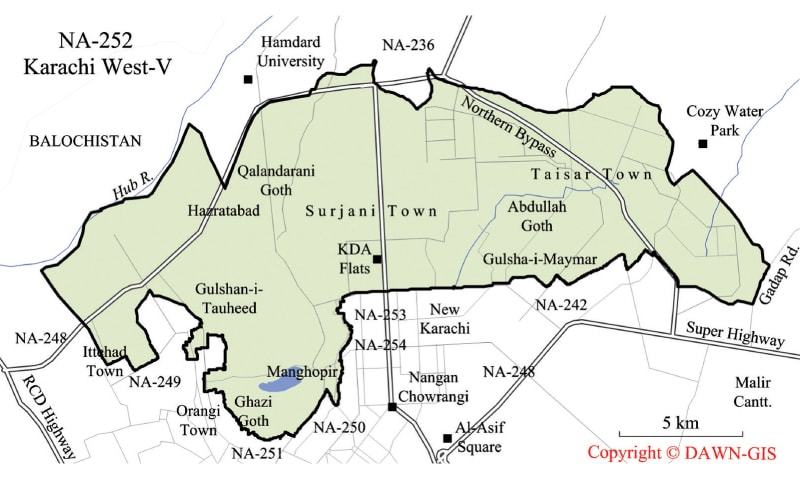 The population in Manghopir is Baloch, Sindhis, and Pakhtuns, with Urdu- and Punjabi-speaking people in low numbers. The Mominabad area is a mix population of Mohajirs and Pakhtuns. NA-252’s Surjani Town area has two faces — the rural part is in Manghopir and the urban part is in Karachi Central. In this area, Urdu-speaking population is in large numbers, as it is in Gulshan-i-Maymar’s urban area.

In the previous arrangement of seats, the Sindhi and Baloch community was at disadvantage because of the Urdu-speaking population, whose vote decided results of the elections. It is evident from the results of the past three elections.

For example, in the 2002 elections, NA-241 Karachi-III was taken by Muttahida Majlis-i-Amal (MMA) candidate Mohammad Laeeq Khan, who got 26,812 votes. His opponent, Muttahida Qaumi Movement (MQM) candidate Ferozuddin Rehmani lost by only 479 votes.

The second highest number of votes was polled by PTI candidate Dr Saeed Ahmed Afridi, who got 27,827 votes. However, Jamiat Ulema-i-Islam-Fazl (JUI-F) and Jamaat-i-Islami (JI) candidates also succeeded in securing 11,697 and 11,438 votes, respectively, showing the presence of religious vote bank.

Also, parts of Manghopir, Gulzarabad, Sultanabad and Pakhtunabad are mostly Pakhtun-inhabited areas, whose population voted for the ANP in large numbers in 2008, but apparently opted to vote for religious parties and the PTI in the 2013 elections.

The old NA-242 has also been an MQM stronghold as it comprised the SITE and Orangi areas. The MQM has consistently won from here in the past three elections, with MQM’s Abdul Rauf Siddiqui, former home minister of Sindh, winning in the 2002 elections by securing 62,690 votes. MQM’s Abdul Qadir Khanzada won the seat in the 2008 elections, securing 147,892 votes, against Mohammad Afaque Khan of the PPPP, who managed to bag only 27,294 votes. Mehboob Alam of the MQM won from here in 2013. He had polled 166,836 votes. The runner-up, PTI’s Akram Khan, secured only 10,889 votes.

The number of registered voters here is 219,042 — 133,060 male and 85,982 female voters. According to analysts, this separation from Orangi has, therefore, essentially cut out the Urdu-speaking voters from here, leaving them with only a slight population, and the majority of voters here now belong to the Baloch and Sindhi communities, with pockets of Pakhtun areas.

Political analyst and senior journalist Zia-ur-Rehman sees this as an advantage to the local population of Manghopir, which was previously unable to elect its own representative because of being merged with Orangi. “The PPPP seems to be at an advantage here as the Mohajir vote here is very less — almost negligible,” he says, adding that any election here now will be completely localised. According to him, the delimitation here has benefited the PPPP, which traditionally draws its vote from the Sindhi and Baloch villages here.

“Now that the rural areas of Karachi West have been merged to form their own constituency, we can see who will benefit from it the most,” he says.

PPPP’s Abdul Khalique Mirza is an old stalwart of the party in this area, and had secured 27,221 votes against MQM’s Mohammad Adil Khan’s 54,603 at PS-97 in 2008, signifying his local support that can help him in the upcoming elections because of the exclusion of Orangi areas.

Manghopir’s social activist Abdul Ghani says that now with the MQM out of the equation, the primary competition in Manghopir will be between the PPPP and the MMA. According to him, the PPPP may face a setback in Sultanabad, Pakhtunabad and Gulzarabad as these areas are mostly Pakhtun-inhabited, and may vote for the MMA.

He presents the case of the last local government elections where UC-6 Pakhtunabad Manghopir-2, comprising the previously-mentioned Pakhtun areas, was won by the JUI-F with the JI coming second only with margins of tens of votes.

“On the other hand, the MMA has virtually no support outside of these areas, which will give an edge to the PPPP,” he says.