Chabahar project not in competition with CPEC: Iran’s ex-foreign minister

KARACHI: Thousands in the city are at risk of losing their right to vote in the upcoming elections as the National Database and Registration Authority (Nadra) is making it difficult for them to obtain their computerised national identity cards.

“If you need to get something done from a Nadra office, take leave for a day or two,” said an irate Rizwan uz Zaman, who wasted an entire day waiting outside a mega centre in North Nazimabad along with his brother as hundreds stood in the queue.

His brother, Qamar uz Zaman, claimed that they got a token at 6am but their turn came at 10am. It took them another two hours to get done with the process. “I should have been at work today, but here I am, dealing with this long queue.”

Mohammad Irfan, a resident of Orangi Town, came to the mega centre in North Nazimabad with his friends. He claimed that a massive neighbourhood like Orangi Town had only one swift centre; that too was not working well enough. “We chose to come here because of poor service at the local office,” he said.

Two of his friends have taken a day off from work. Even the queue for obtaining a token is moving at a snail’s pace. They have no idea how long the process will take.

Recently, a Nadra executive registration centre near Jauhar Chowrangi in Gulistan-i-Jauhar was shut down, forcing applicants to go to an old office which is tucked away behind a regional FBR building.

Another executive registration centre in Naseerabad, a neighbourhood in Federal B Area, closed down a few months ago and a restaurant has opened in the place since. 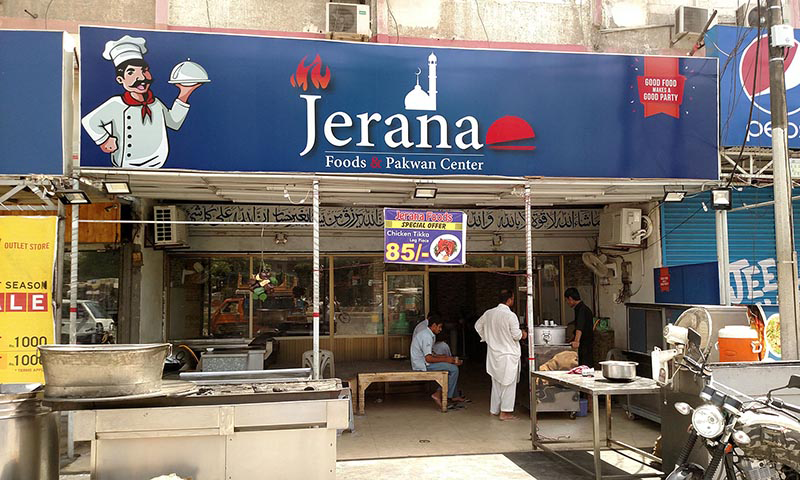 In Naseerabad, a restaurant operates at the place where once Nadra’s Executive Registration Center existed — Photo by Bilal Karim Mughal

At Ayesha Manzil, a registration centre is only handling cases of verification — CNICs that have been blocked or flagged.

Even though the board outside clearly reads: ‘registration centre’, it does not take any new CNIC requests, leaving thousands of people of nearby areas with no option but to suffer in queues at the mega centre in North Nazimabad.

A swift registration centre next to Nisar Shaheed Park in Karachi’s DHA locality has also been closed, and residents are now forced to visit the mega centre in DHA, off Korangi Road.

Noman Ahmed, an applicant at Nadra registration centre in Gulistan-i-Jauhar, pointed out that since he lived in North Karachi, it would have been easier for him to apply at the mega centre in North Nazimabad, but he chose the Jauhar branch just to avoid the crowd.

“At the mega centre, you sometimes fail to enter the office after waiting for a whole day,” he said. “People who don’t know that their CNICs can be made from any centre across Karachi are bound to wait countless hours for their turn.”

The massive crowd outside the mega centre in North Nazimabad explains Noman’s point, whereas the crowds at the other two Nadra mega centres in DHA and SITE areas are no different.

A senior Nadra official, on the request of anonymity, confirmed that over a dozen swift and executive centres were shut down in recent months to divert the public to the mega centres. “The move was aimed at streamlining the process; however, it did not go as planned.”

The decision, he said, had not eased things for the people who now had to travel long distances because their nearby centres were closed.

Last month, Nadra Chairman Usman Mobin paid surprise visits to Nadra centres in the city, including the mega centres in SITE and DHA, without revealing his identity. When his turn came, his papers were rejected by the staff on duty. Later, he suspended two staffers for “causing trouble” to the citizens.

Political parties, on the other hand, view the closure of these centres as detrimental to the democratic process and fear that a large number of their voters may not be able to vote because of the delays.

Muttahida Qaumi Movement-Pakistan spokesman Aminul Haq said that merely creating mega centres was not a solution to the problem, and that Nadra should open more centres keeping in view the size of Karachi’s population instead of closing the existing ones.

“How will the people exercise their right to vote if they are facing so many difficulties in obtaining CNICs?”

He termed the Nadra chairman’s recent directive for the centres to operate from 9am to 9pm and suspending the staffers a cosmetic move with no far-reaching benefits.

“Instead of increasing staffers, the current staff is being forced to work for about 12 hours, which is detrimental to the well-being of the staffers as well,” he said. 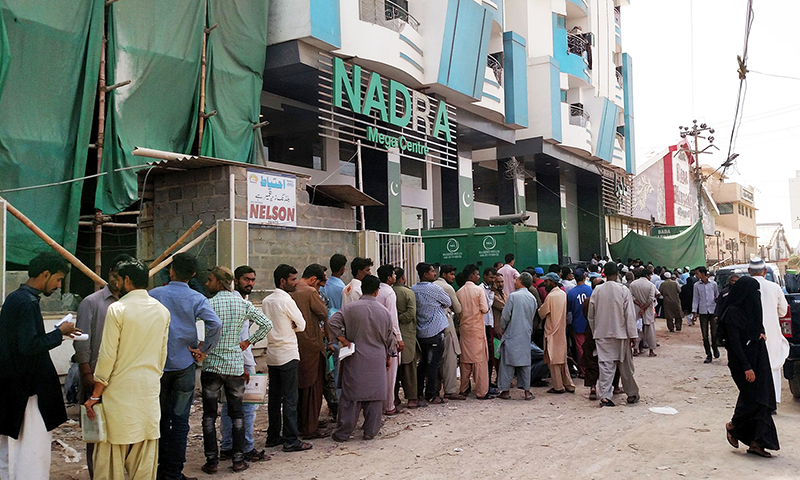 A Nadra source also confirmed this was the case with centres which were ordered to work for 12 hours after the chairman’s recent visit to Karachi.

Rehman, whose party has recently been in news because of its protests against Nadra, said that the JI had held several meetings with Nadra high-ups in which it was assured that public complaints would be resolved, but concrete steps were yet to be seen.

The general secretary of the Pakistan Peoples Party’s Sindh chapter, Waqar Mehdi, also believed that as draft electoral rolls were already up for display, anyone who attained the legal age to vote during this period, but did not get a CNIC due to the delay would amount to a “loss of votes”.

He said that Nadra should speed up its process on a “war footing” basis to ensure that no potential voter was left out.

MPA Samar Ali Khan of the Pakistan Tehreek-i-Insaf said that more Nadra ‘satellite centres’ were needed. “NA-250 alone has over two dozen settlements. How can one Nadra mega centre cater to such a huge population?”

Dawn approached Nadra several times to get an official response to the complaints. However, their media relations department did not provide any explanation in more than two weeks.