How will the women from Mianwali who do not have CNICs vote in the upcoming election?

Chabahar project not in competition with CPEC: Iran’s ex-foreign minister 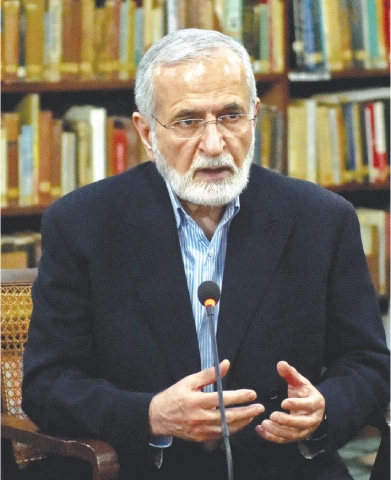 KARACHI: Iran’s former foreign minister Kamal Kharazi has said the perception in Pakistan that Iran’s Chabahar port, including subsequent development of roads and railways networks for enhancing the country’s trade, is a ‘rival project’ of the China-Pakistan Economic Corridor (CPEC), is not correct.

He was speaking at a roundtable discussion with journalists, former and current diplomats and research students at the Pakistan Institute of International Affairs, a foreign policy think tank, here on Friday. A multitude of foreign policy issues related to Iran and Pakistan relations and their impact on the region came under discussion during the programme.

Speaking on the occasion, Mr Kharazi was of the opinion that though it was true that India had massively invested in the Chabahar project, it was an open platform for all regional countries to participate in. “The Chabahar project is aimed at connecting Iran with Central Asia, and the ultimate goal is to uplift the Iranian economy,” he said, adding that the project was under deliberations for a long time, hence, it was not correct to link its launch with that of the CPEC.

“While we are engaging with India on the economic front and India is investing in Chabahar, we have not given exclusive rights on the project to them,” he said, adding that Iran “was considerate of the situation of Muslims in India and in the region” while making economic partnerships. “We have urged India a number of times to resolve the Kashmir dispute in a peaceful and justly manner,” he said.

“We are even ready to mediate between Pakistan and India on the 70-year-old dispute, but we haven’t got a positive response from India on it ever,” he said. “But if we talk about economic partnerships, then Pakistan also has relations with the United States which has put a number of sanctions on us, but [Iran] doesn’t mind it,” he said.

He was of the opinion that bilateral trade between Iran and Pakistan suffered due to a number of reasons, including reluctance of Pakistani banks to do business with Iranian entities due to a fear of US sanctions. “It is one of the most important factors that has affected the trade relations between the two countries,” he said. The two governments are in talks with each other to enable small Pakistani banks that don’t deal with the US so that more trade could be carried out between the neighbouring states. “The Free Trade Agreement between the two countries is currently under negotiation, and once signed, it will open doors for more business,” he added.

Mr Kharazi, who served as Iran’s foreign minister from 1997 to 2005, said that another issue that had negatively impacted the bilateral trade was the “lack of political will from Pakistani side due to intense pressure from the United States and middle-eastern countries”.

“We have completed the Iranian side of the gas pipeline project, but the Pakistani government seems to be under international pressure [which is] stopping it from proceeding any further,” he said, adding that the perception created by some circles that the projects were stalled due to Iran offering gas at exorbitant rates was based on speculation.

Talking about the US presence in Afghanistan, he said that in his view, the US would not be leaving Afghanistan any sooner as it had ambitions to stay in the region because of its strategic goals. “Iran supports any kind of peace negotiation that is held between the Afghan government and the Taliban, and if such a deal is reached its conclusion, the US may not have any excuse for its continued presence in the country which it invaded 17 years back,” he said. “All neighbouring countries have a role to play [in bringing stability to Afghanistan]”, because, he said, all the [regional] countries were suffering from the conflict at the heart of the region.

In reply to a question about Iran’s alleged interference in regional conflicts, he said that one of the pillars of Iran’s foreign policy was to oppose the interventions of world powers in other countries, especially the Muslim ones. “We did support Iraq [after the US invasion] and we are supporting Syria as well, but governments of these countries invited [Iran] to help them defeat the militant Islamic State group. It would have been intervention had it been an uninvited exercise,” he said.

In response to another question, he said economic sanctions had hurt the Iranian economy for a long time, however, it was still doing better than the economies of other countries which were not under US sanctions. “Our people have tolerated the sanctions for a very long time and have suffered at the hands of it, but we are fighting the problems with our intelligence, wisdom, and resilience,” he said.