How will the women from Mianwali who do not have CNICs vote in the upcoming election?

Families of the ‘disappeared’ hear nothing but silence from officialdom

KARACHI: On a sunny weekend afternoon, the road leading to New Rizvia Society in Karachi’s Safoora Goth area has very thin traffic. A huge billboard overlooking the visitors at the society’s main gate demands the recovery of Engineer Syed Mumtaz Hussain Rizvi. Rizvi’s wife and nephew talk and share the details of his disappearance in the living room, decorated with religious inscriptions and photos.

Rizvi ran a business of computer hardware and was on a “business trip” to Quetta in January, when he lost contact with his family on the 23rd of that month. His wife, Zehra, recalls the day when she last talked to her husband.

“He had said that he was going to be in Karachi by 9pm. We waited for him throughout the night, and when he didn’t show up, we inquired his friends, partners, and other acquaintances, but he was nowhere to be found,” she says. “I last talked to him at 5.30pm that day, and his mobile phone went off shortly afterwards. We are not in contact with him since then.”

The family then approached the Sachal police station, which registered a complaint — not an FIR. “We have also filed a petition in the Sindh High Court where our case has been heard once, and the next hearing is on March 8.” The complaint filed says that he had “left home for work on Jan 23, but didn’t return”, which is different from the narrated story according to which he was returning from Quetta. She attributes the discrepancy to the fact that the family at that time “didn’t know where he went missing from. We don’t know his last whereabouts to this day”, says his wife.

‘Holding someone in illegal confinement is a violation of human rights’

A doctoral student at a private university in Karachi, Rizvi also served in the editorial board of a monthly Urdu magazine which carried scientific and educational articles. The disappearance of the father of five — four daughters and a son — has traumatised the family. “Education of my children is suffering and so is our daily routine; our lives have been completely altered after this incident,” says Zehra. “To this day, we have received no phone call or any piece of information from any person, group or law enforcement agency which would inform us about him.”

The family stresses that he was not part of any religious or political party, concerned with only “welfare work”. 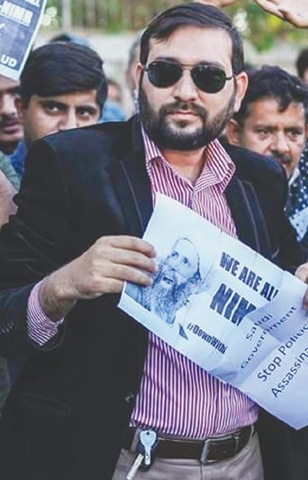 “He used to help people in need and kept others before himself. How could a man with such a busy schedule be involved in any [subversive] activity?”, she questions, demanding that he be produced in court with all available evidence if he was wanted by the state.

Boys are winding up their game of cricket in a street in Abbas Town, a Shia neighbourhood in Karachi’s Gulshan-i-Iqbal area. The home of Syed Samar Abbas is not difficult to locate as it is fairly close to a community clinic-cum-mosque. Some children of the family are studying in a courtyard as Abbas’s brother, Ghazanfer, talks to this writer. Abbas, he says, was on a routine trip to Islamabad for his “business-related” work in January 2017’s first week. Jan 7 was the day when the family last heard from Abbas, who has been missing since.

Father of three, Abbas had previously worked as an IT professional in Saudi Arabia, and had returned to Pakistan a few years ago, after which he had set up his own software development business. It was in this connection that he had been to Islamabad from where he never returned. The FIR registered at Ramna police station of the federal capital quotes his family that he was last known to be in Sector G-11.

“Abbas was a field activist who used to work for community welfare, and had good coordination with the law enforcement agencies”, says Ghazanfer. His father, an income-tax adviser at the Lahore High Court, has been ailing and so is his mother; his parents demand the recovery of their son.

“Sindh Home Minister Sohail Anwar Siyal had assured us that he will be recovered when we marched for his recovery back in October 2017”, says his mother, adding that they had contacted the National Commission for Human Rights, and Commission of Inquiry on Enforced Disappearance — informally known as the Justice Javed Iqbal Commission — but they had received no positive news yet.

The family of the 40-year-old has also filed a petition in the Islamabad High Court for his recovery, but no headway has been made. Like Rizvi’s family, Abbas’s family also said that they wanted to see him tried in court if he was involved in any act of sabotage. “He was a loving father, a caregiver to his ailing parents, and a patriotic citizen, his disappearance has pushed his children and us in a perpetual state of trauma.”

‘Not in CTD’s custody’

Senior official of Sindh Police’s Counter-Terrorism Department (CTD) Raja Umar Khattab says that the two missing persons were not in the custody of the CTD. “We have a system in place, through which we legally arrest the suspects, and produce them in court,” he says, adding that he had no knowledge of the whereabouts of the mentioned persons as his unit was not dealing with the matter. “Abbas had helped law enforcement in producing witnesses in some cases a while back, however, the CTD doesn’t have any intelligence on his disappearance.”

On the other hand, vice chairperson of the Human Rights Commission of Pakistan (HRCP) Sindh chapter, Asad Iqbal Butt believes that the so-called ‘missing persons’ were in custody of law enforcement agencies. He estimates that about 150 people were missing from Sindh of which about 60 hailed from Karachi. He said that a fair trial was the basic right of all the citizens, and holding someone in illegal confinement was a violation of human rights. “Activities like these bring bad name to otherwise respectable institutions, therefore if [the persons] have done anything wrong, let the courts decide the matter,” Butt says.