All Night Astronomy – RutJaga at Countryside of Sindh

From kindergarten to CSS: The ‘cram to pass’ model abounds

Metro Bus or Mars: The problem with our priorities

1969 was the year, when the United States succeeded in landing humans on the moon – our closest neighbour in space – and safely bringing them back to Earth.

The United States, being the most technologically advanced country on Earth, put that feather in its hat about 45 years ago.

What was the condition of India and Pakistan at that time? The two countries had already fought two battles, and were about to plunge into another one in 1971.

Explore: Space: Above and Beyond

SUPARCO was set up by the most famous of all Pakistani scientists and the country’s only Nobel Laureate: Dr Abdus Salam.

In 1960, President John F Kennedy had announced that the United States planned to land an American on the moon, and bring him safely back to earth before the decade was over.

Dr Tariq Mustafa, a scientist at Pakistan Atomic Energy Commission’s, writes in his memoir that for this project, NASA needed to map the wind conditions at the upper atmospheric region above the Indian Ocean.

In mid-September 1961, Dr Abdus Salam and Dr Tariq Mustafa held a meeting with NASA officials in Washington. On the occasion, NASA offered help to Pakistan in the development and launching of rockets to map the atmosphere above Indian Ocean, on the condition that any data acquired from the research on upper atmosphere will be shared with NASA.

Pakistan quickly bagged the offer, and started working on the project. On 7 June 1962, Pakistan launched an unmanned rocket, Rehbar-Ifrom Sonmiani, with assistance from NASA.

Dr Tariq Mustafa led the team working on this project. With this experiment, Pakistan became the third country in Asia, first in South Asia, and only the 10th country in the world to have conducted such a launch.

Read on: Footprints: No space for Ahmadis

According to a report of the Wisconsin Project on Nuclear Arms Control, before the June 1962 launch, NASA had started training Pakistani scientists at Wallops Island and the Goddard Space Flight Centers. It also put up fellowships and research associate programs at American universities for “advanced training and experience” in the field of space.

In subsequent years, however, Pakistan’s space program severely lagged due to the political turmoil which enveloped the country.

India is now independently developing satellites, launching them on its own, and is the first nation to put its orbiter in Mars’s orbit in the first attempt. Meanwhile, Pakistan is still limited to Geographical Information Systems (GIS), remote sensing, and communication satellites.

The Paksat-1R, launched in 2011 is Pakistan’s latest satellite, that was funded, designed, built, and launched by our friend in need, China.

Pakistan’s only fully functional satellite is this communication satellite. So much for a national space agency in the 21st century.

Putting aside NASA and the European Space Agency, ISRO too started off with resources similar to Pakistan, and I will argue, with even lesser expertise than Pakistan.

SUPARCO was ahead of all other Asian nations in the space race, but what happened to us then?

On September 24, when India’s Mars Orbiter Mission, or Mangalyaan successfully entered the Martian orbit, I was completely overwhelmed with happiness. Why? 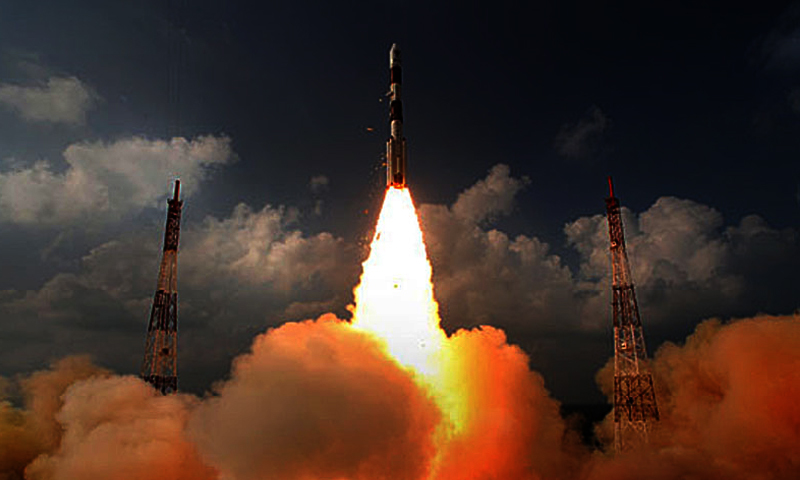 Because as a person deeply interested in science, scientific achievement anywhere around the world – even if it is in some far off island in the Oceania – the achievement humbles me.

But at the same time, I think about Pakistan, the country whose passport I hold, and whose National Identity Card gives me an identity.

Pakistan is now nowhere in the space race.

Pakistan is nowhere near eliminating polio.

Pakistan is nowhere in literacy.

Pakistan’s education budget was, in actual terms, reduced by 11 per cent in the recent budget, whereas other countries are investing more in health and education.

It is obvious that the nation’s priorities are wrong.

Explore: Space exploration and Pakistan: The significance of space technology

I am not a critic of infrastructure projects, but roads, mass transits, flyovers, schools, and colleges are things Pakistan should’ve built a long time ago. The current focus should’ve been on education, science, and technology, with emphasis on space technology.

Why space technology? Because this is one area where technological advances require such intensive research on every subject, all the way from electronics to human biology, that every new project propels forward not just the field of space research but all other sciences touched by it.

Historically, we have seen several discoveries in one field or another as offshoots of space programmes.

For example, it was the US space shuttle’s fuel pump design which led to invention of the artificial heart. The heart has now been transplanted to more than 20 people.

The algorithm developed for sharpening the images acquired from the Hubble Space Telescope now helps sharpen the images of mammograms for treatment of breast cancer patients.

Dresses to keep the body temperature controlled for patients in certain diseases were inspired from astronauts’ spacesuits.

That is why the US spends billions of dollars on NASA every year; not just for an obsession with space, but for technological prowess overall, which ultimately translates into more development for people.

A number of people are still bashing India on failing to eliminate poverty before reaching out for Mars.

I will respond by saying Pakistan has neither eliminated poverty, nor reached Mars.

It is about time that the government reconsider its priorities.

Policies and funding allocations in our federal budgets need a revision. SUPARCO’s budget should be increased. It had potential in the past, and it still does! I met some great scientists from SUPARCO in a public fair once and was amazed at the enthusiasm of these people.

SUPARCO can still take the lead in the regional space program, if the government puts its attention towards it.

And who knows if that horizon is as far as Pluto?