It was my wish since a long time, that an Astronomy Event be arranged in Hyderabad. But for many reasons, this couldn’t happen. When I was gifted a precious telescope by Dr. Aslam Chohan from England, I thought I now could organize an event easily.

Soon after receiving the telescope, I realized the the World Space Week was approaching, I decided to celebrate the W.S.W at the Isra University Hyderabad and for that, I instantly got permission from the university administration.

I contacted with my friends Amjad Nizamani and Zeeshan Ahmed, and we were supervised by Sir Naveed Ghani of Telecom Department. We were so excited for this event because it was first of its kind in our city Hyderabad and we were its organizers.

Poster of the Event

I left the home with Amjad at 6:05 PM and picked up Zeeshan at 6:24 PM. At 6:32 PM, Amjad, I, and Zeeshan reached the university. My dad and many other people including the professors of our department were already there. We had arranged multimedia projector and a large screen to show the participants different pictures and slideshows.

Setup of the Stuff

Setting up the telescope took about 15 minutes, meanwhile multimedia projector was setup.

The event’s designated time was 8 PM but it started way before than that. The Imam of the Isra University Mosque innaugurated the event by observing the Moon at 35x magnification.

Sky clarity was awesome, the atmosphere was also very stable, so the telescope wasn’t shaking and the images were lovely.

Soon there were many people and everyone wanted to see the Moon. People asked many questions about the Moon and the Solar System. I gave them explanations about the Lunar Phases and the Eclipses. 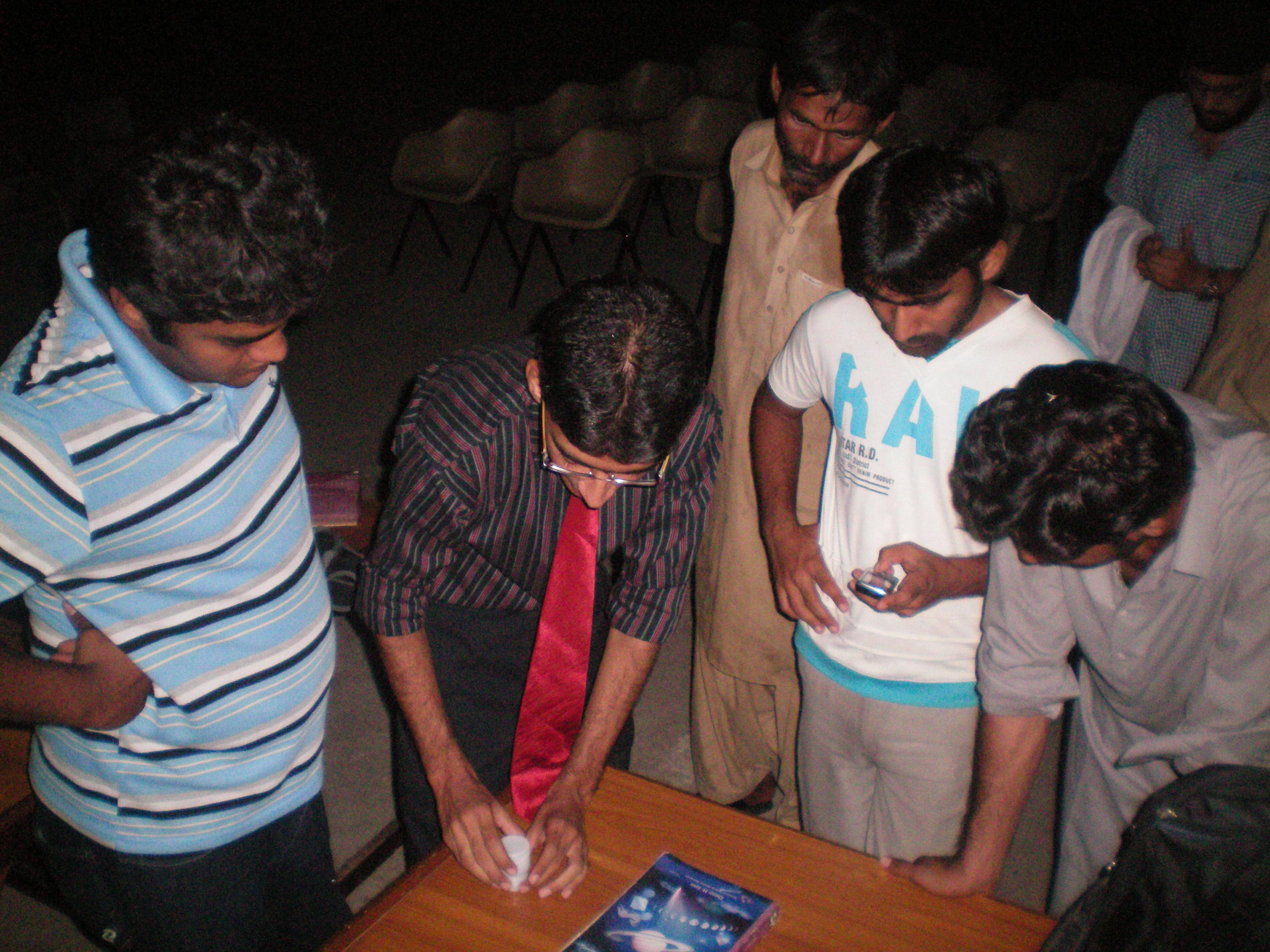 Explaining the geometry of Lunar Phases

I projected the bigger picture of Moon from the “Stellarium” software to the screen. So those participants waiting for their turn could see the Moon closely too.

There were tries to take pictures of the Moon through the eyepiece of the telescope. Sir Naveed was highly successful in capturing some fascinating shots.

By 8:45 PM, Jupiter was fairly up and bright, appearing from behind the trees, it was slowly rising above from the Eastern Horizon. I turned the telescope towards it, and it was a nice little white ball in the field of view. Participants were amazed to see that the object which is visible as a star to the naked eye, is, in fact, the largest planet of the Solar System.

Planet Jupiter is the largest planet of Solar System

Jupiter has got 64 moons, out of which, 4 moons namely Io, Callisto, Europa, and Ganymede were discovered by Galileo Galilei, so these moons are also called Galilean Moons of Jupiter. These 4 moons are easily visible through even the smallest telescope.

Jupiter and its Moons

People liked the Jupiter very much. Then I increased the magnification of the telescope from 35x to 56x. Now, we could easily see the atmospheric bands of the Jupiter. Different colors of Jupiter fascinated everyone.

I texted Dr. Fahad Laghari to ask if he was coming or not, and as soon as the text propagated down to his mobile phone, I saw him appearing from the darker side of the venue. He was accompanied by Dr. Om Parkash, another astronomy enthusiast from Hyderabad.

Everyone was asking questions they had in mind since years. The query and discussion part is what I like the most. It makes us learn new things because everyone has different ideas and different questions, which lead you to find the answers and thus increase your knowledge. 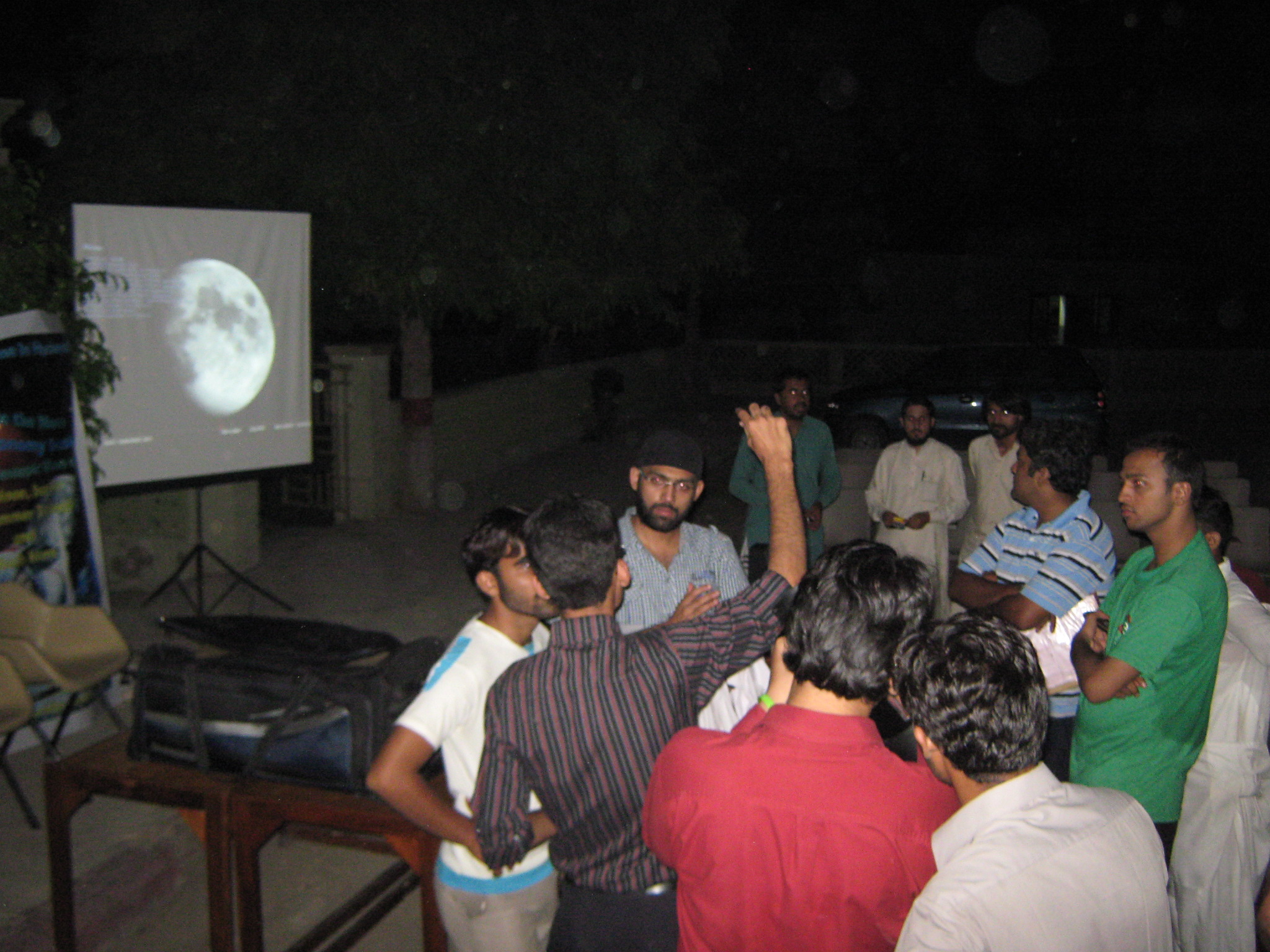 Soon there were media correspondents from Express News, KTN, Dhoom TV, and Radio Pakistan, who had come to cover the event. I showed the media personnel the beautiful views from my telescope and they were really happy. They interviewed me and asked about the event and its aim. There were many questions by the reporters about the telescope and astronomy and they talked to my family too about the event and its outcomes.

I then took the laser pointer and guided the people through different stars, as promised in the poster, I told them about the Summer Triangle, and also about different constellations and mythologies related to them. I told them about “W” of Cassiopeia the Queen, and Fahad Laghari and Sir Naveed argued if Cassiopeia looked like a “W” or like an “M”, and to answer this question, Ptolemy was not there.

Cold drinks were served. I was so busy with the telescope that my cold drink was handled by my friend, I would just take a sip and return the can to a friend, then another sip. This continued until I finally got the chance to finish it with peace.

The Pro Vice Chancellor of the University, Mr. Hameedullah Kazi graced us with his coming. I showed him the objects and explained to him about the event and our astronomy society. He also encouraged us to keep organizing such events on regular basis. Later I got photographs with Sir.

Zeeshan was awesome when he was describing different theories related to parallel universes and similar concepts to Fahad Laghari. Zeeshan has command over such topics and though I was busy with the telescope, my ears were pointed towards Zeeshan all the time.

Meanwhile Amjad and Zeeshan were showing the participants “Double Double” (Epsilon 1 and Epsilon 2 Lyrae), a multiple star system, which appears as a single star to the naked eye, and as a double in a binoculars  and in a small telescope. Higher magnifications have shown us that this double star has in fact 2 more component stars which can be resolved easily by a telescope of about 6″ diameter under good conditions. 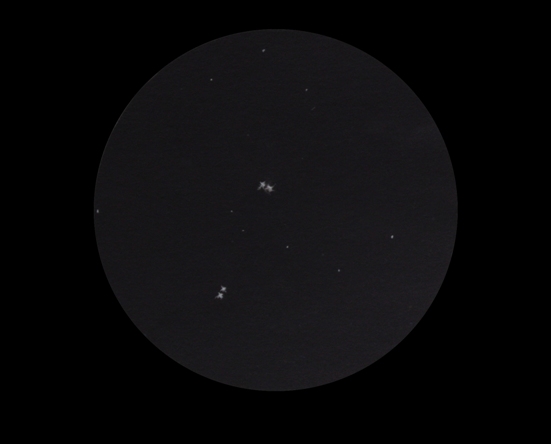 The Double Double through a medium sized telescope

Amjad guided people through different stars very well with his laser pointer. People see the stars daily, but very few of them know the reality of them, so telling them about the stars was excellently done by Amjad.

Ma’am Ayesha from the Computer Science department especially wanted to see the “Double Double”, which was shown to her through the binoculars by Amjad. Due to plenty of people who were not letting me to turn the telescope towards anyother object besides the Moon and the Jupiter, I had to wait before I could point my telescope at the “Double Double”.

As the audience started leaving, I asked the search lights to be turned off for the darker sky. Now I could take the people to the double stars.

The first target was obviously the Double Double. Through the telescope, they appear in a straight line and a little farther from each other, so you are able to resolve them into a double. The Epsilon Lyrae system is about 162 Light Years away from the Earth.

The next double star to be observed was Albireo (Beta Cygni) which can easily be distinguished as a double star in a small telescope. The component stars are named as Beta 1 Cygni and Beta 2 Cygni. They are separated by 35 seconds of arc. The two components are one of the best contrasting double stars in the sky due to their different colors. It is not known whether the two components are orbiting around each other in a physical binary system. If they are, their orbital period is probably at least 100,000 years.

Showed both of these double stars to Ma’am Ayesha and she was very happy. People really were amazed by the double stars and in fact, double stars are rarely known reality to the people, although, according to a study, about half of the stars of the Milky Way galaxy are double stars.

Moiz complained that he hadn’t seen the double stars, so I turned the telescope towards Double Double and Albireo for him and he was excited to see those stars which were invisible to the naked eye.

Seven Sisters were walking from the East to West slowly, and I decided to turn the telescope towards them. Messier 45 or the Pleiades is a splendid open cluster in the Constellation Taurus the Bull. It looks awesomely beautiful from a 10×50 binoculars, and from a telescope, you can see the dark bluish colors of the stars. Pleiades star cluster has been found to be known to the Babylonians even in 1600 B.C.

Constellation Andromeda the chained lady was so high. I wanted to go for the M31 but I didn’t get time to turn it towards there. When I realized that I had a Comet in my hitlist, the Constellation Hercules had gone very low in the Western Horizon, Sir Naveed and I tried very hard but couldn’t locate it because the stars had gone so low in altitude, that they were no brighter, so therefore we had to abandon the idea of Comet Garrard.

The final double star to be observed was Almaak (Gamma Andromedae). This star is also known as “Al Rijl al Musalsalah” in Arabic, which translates to “the Woman’s Foot” This is a striking pair of stars which looks as a double in a telescope, but high power observation reveals that the second companion of this double is infact a triple star system. What appears as a single star to the naked eye is thus a quadruple star system, approximately 350 light-years from the Earth.

Last object of the night was the Ring Nebula (M57) in the Constellation Lyra. Finding it is no difficult if the sky is dark and the finder scope is properly aligned. I didn’t have the latter one. So Sir Naveed held the laser pointer in his hand, and we discussed how to find it. On the large screen, we decided to find the star Sulafat (Gamma Lyrae) and make a line from it towards Sheliak (Beta Lyrae) and hop from Sulafat to Sheliak. Ring Nebula lies a little more than half way on this line. But its not that easy as it sounds, since distinguishing the nebula at small magnifications is a little difficult and you have to be very patient while finding it. This task was accomplished by Sir Naveed at last, and we observed the Ring Nebula. I don’t know about others, but I could differentiate it easily from other stars.

Messier 57 – The Ring Nebula in Lyra

After the observations, we did a photography session of the Moon and us again. The telescope was unscrewed by me and the packup was completed at 12:14 AM. At 12:18 AM, we left the university. Dropped Zeeshan at 12:42 AM and Amjad dropped me at my home at 12:56 AM.

From Right to Left: My Father, Myself, Zeeshan Ahmed, Amjad Nizamani

The event was a success. I had not expected this good response from the people. I enjoyed the questions of the people, its a joy to tell people about this beautiful Universe. It was no doubt the most remarkable night of my life. I returned back to my home with loads of good memories.

It was decided that such events be held on a regular basis. Thanks goes to Sir Naveed Ghani, Amjad Nizamani, Zeeshan Ahmad, and everyone who helped and encouraged me at all times.

All of us live in a gutter, but some are looking at the stars. (Oscar Wilde)