Anything that can go wrong,

How I Built My Telescope

While surfing through some astronomy websites yesterday, suddenly one sentence drew my attention. It was talking about the shift in zodiac signs. By that time, I had started receiving questions from people about it.

I told them simply, that it was JUST correct information, but it was not being presented with all the facts. It’s just being told to everyone that the zodiacs have shifted, by why this has happened was needed to be told.

When the number of questions went on rising, I thought to make a clarification, so in further lines; I will try to clarify to all of you about this new zodiac sign thing.

We’ll first have to check out what Astrology really is and what systems are used in Astrology.

According to Merriam-Webster Dictionary, Astrology is defined as “the divination of the supposed influences of the stars and planets on human affairs and terrestrial events by their positions and aspects”.

As we can see, Astrology is a method which uses positions of stars, and claims to predict the future events and also to know about the events which were or are being experienced by any human being at any given time.

Astrology is very old methodology. It dates back to almost 1st millennium B.C. There are two systems of Astrology which are used commonly nowadays, one is Eastern and other is Western. Eastern Astrology is also called Jyotish, Sidereal, or Vedic Astrology while Western is also known as Tropical Astrology.

The sky is divided into 88 constellations, or 88 parts. When the Earth moves around the Sun; the Sun, the Moon and the Planets appear to pass through 13 constellations. These 13 constellations are called Zodiacs and the line which is followed by the Sun, Moon and Planets is called “The Line of Ecliptic”. If we study it astronomically, then the Zodiacs are 13 but Astrologers always consider 12 Zodiacs. But we will not discuss it for the time being. 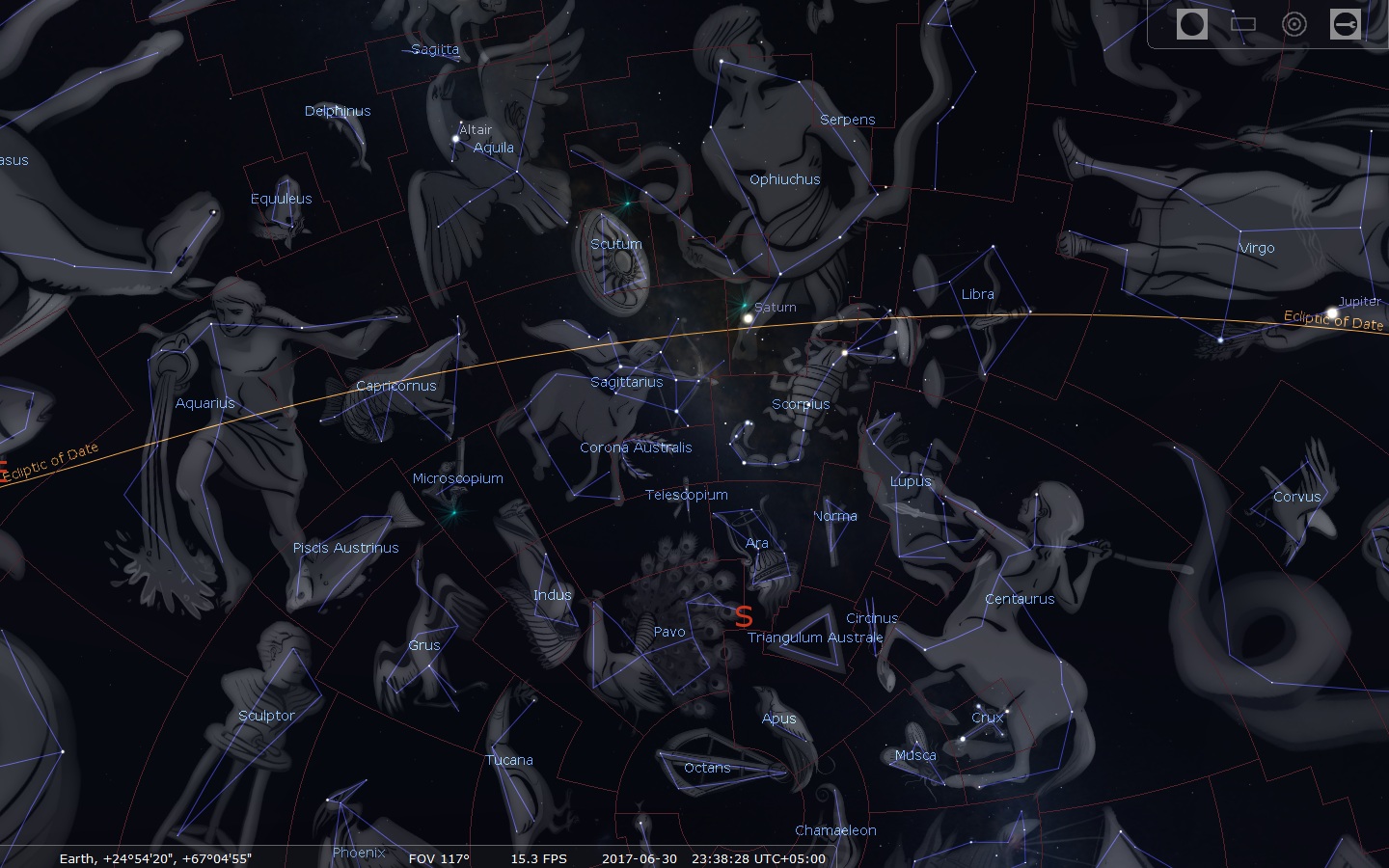 Line of Ecliptic shown to pass through the Zodiac Constellations

As you can see in the above image, the Ecliptic (dark red line) passes through all the Zodiacs (boundaries shown in red), and all the Planets, Moon and the Sun appear to travel along with the Ecliptic.

Tropical Zodiac is a fixed system. On March 21, on Vernal Equinox, the year of Tropical Zodiac starts from Aries. 2500 years ago, when the Zodiac system was developed, the Sun used to be in the Constellation Aries from 20th March to 20th April.

Every day as the Sun appears to rise from East and set in the West, it actually follows a defined path which is called the Ecliptic. The Ecliptic passes through 13 Constellations out of 88. Therefore 13 zodiacs are there. The Sun spends a few days in each of these Zodiacs throughout the year. In the image below, you will find that on 1 April, 0 A.D, the Sun was in the Constellation Aries. 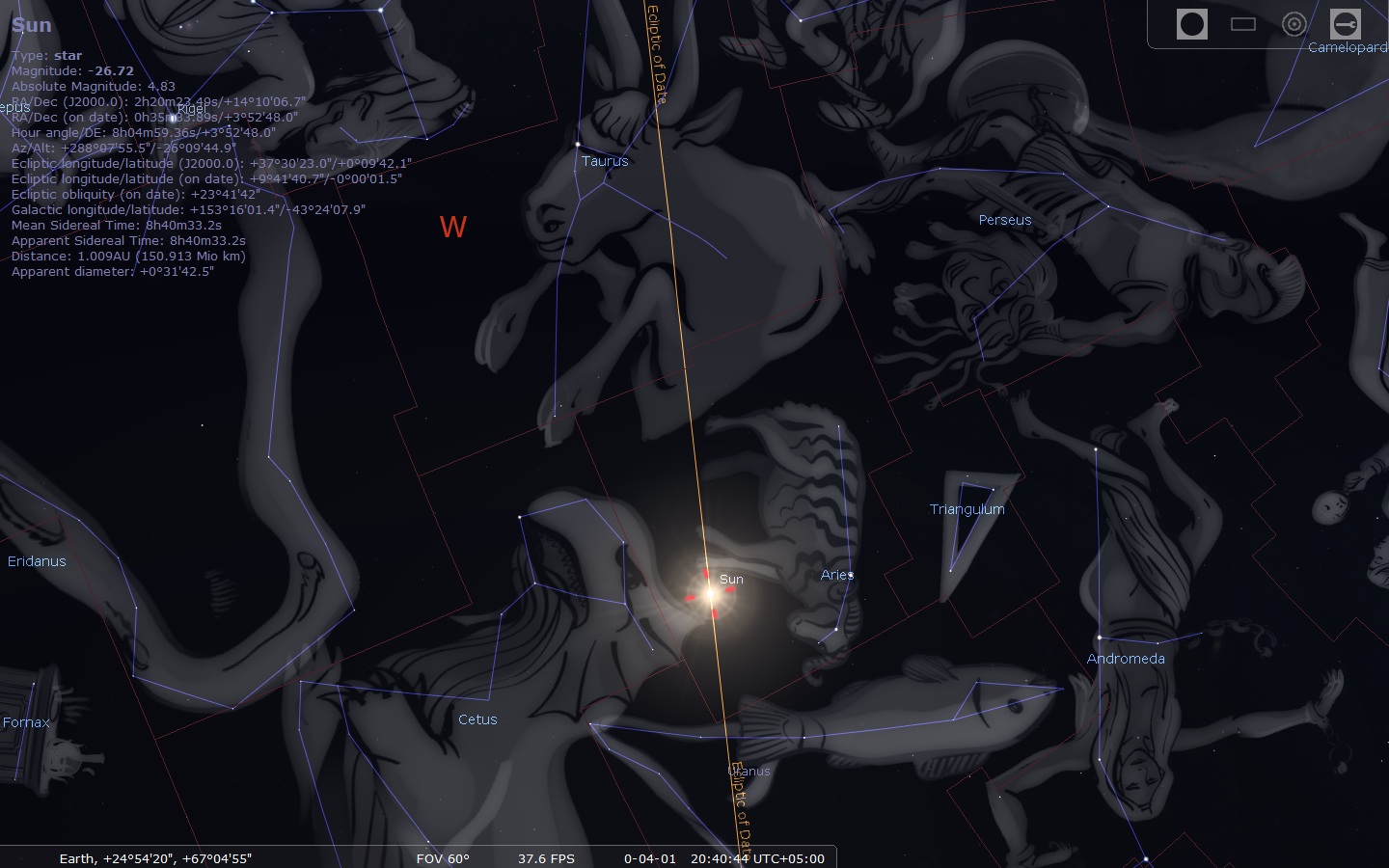 The Sun is shown to pass through the Constellation Aries on 1 April, 0000.

People at that time observed the movement of the Sun throughout the year and then exact dates were assigned to every Zodiac. And Tropical Zodiacs still follow the same dates. But are these dates still correct? Does the Sun pass through Aries today on the same dates?

Astronomically, when we study the apparent movement of Sun through the constellations of Zodiac, the Sun is in the Constellation Aries from April 18 to May 13. This is because, over the cycle of 25,700 years, the axis of Earth slowly wobbles like a spin top, which causes the change in the apparent position of constellations and the Zodiac system. This wobble, the Precession of Equinoxes is a fact, which is simply overruled by Western Astrology. That is why a person, who was Aries at the time of Ptolemy, would still be considered an Aries.

The precession of equinoxes or simply precession, was not known at the time Astrology was established, therefore it disregards the change in the position of constellations as viewed from Earth. But Eastern system by its virtue, since it uses Sidereal system, always follows precessional movement.

Precession of the equinoxes causes changes in apparent position of stars over a cycle of 27,500 years.

From the above image, it is clear that the axis of Earth continues wobbling over a period of almost 25,700 years. During the course, the positions of stars and constellations, as we see them from the Earth, changes.

So the actual, astronomically proven fact is that the Sun is not in the constellation Aries on 23rd March now. It is in Pisces, as shown in the picture below. 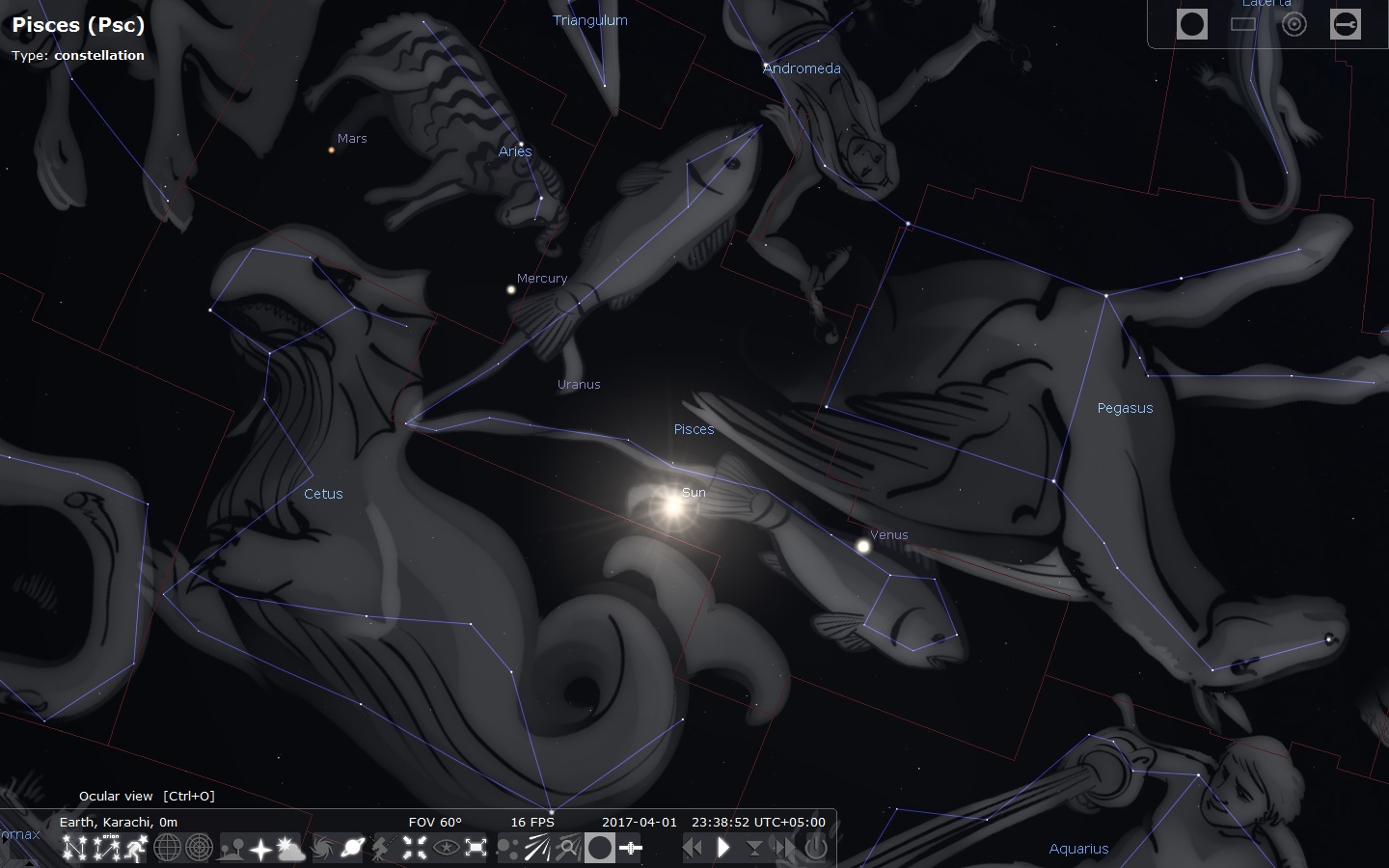 The Sun in the Constellation of Pisces on 1 April 2017.

But things differ when you consider the situations under Eastern astrology or Jyotish. The Sidereal Zodiac system used by Eastern Astrologers follows the change in the axis of rotation of Earth. Thousands of years ago, these 2 astrological systems, Western and Eastern completely coincided with each other at the time of their establishment. But as the time passed, the axis of Earth kept wobbling; this made the apparent position of Planets, Constellations, the Sun and the Moon very different from those of the starting point. Since Western system is not allowed to follow the change, it remained fixed. But Jyotish system kept changing over time. Therefore, there is a huge difference between Eastern and Western astrology.

Now we will once again talk about the change.

But does that really mean that my sign has changed to Libra? The answer is YES & NO, it’s because this zodiac shift is based on astronomical calculations, which are slightly different from Astrology and aren’t considered by Astrologers. So according to Astrology, my sign is same as before (depending on the system used), but Astronomy, which is 100% scientifically correct and in accordance with modern observations and Mathematics, tells me that my Zodiac has been shifted and I have a new sign.

Astronomers take the scientific route, which is a well established fact with correct data. While Astrologers are still using the old and self-made method of dividing the sky in 12 equal parts of 30 degrees each. This in fact is against the scientific data, which tells us that the dates have been shifted and the Zodiacs are 13 instead of 12.

Astrology was established when there was no extensive knowledge of celestial system. The Geocentric system was in use for explaining the Earth-Sun-Planetary system, which considered Earth to be stationery and everything to revolve around it. There was no knowledge of celestial mechanics at that time. Therefore, astrology is also called a pseudoscience, which does not have any scientific and correct foundation.

Below is the comparison of different zodiac systems.

Since both, new zodiac signs and Eastern zodiac signs rely on Sidereal zodiac system; they both tend to change over the time. But even though Sidereal Zodiac system is not completely correct. A minor difference of a few days is because new Astronomical Zodiac system also includes Ophiuchus, the 13th constellation, whereas it is not included in Eastern system. Also, the Sun is said to be in the Constellation Scorpio for 1 month in both Sidereal and Tropical Zodiac systems, but the fact is, it’s there just for 7 days.

I will now touch the case of 13th zodiac, Ophiuchus the Snake Holder. Ophiuchus is a constellation and the Sun on its tour through the constellations, passes through Ophiuchus from November 29th to December 17th. Based on this path of the Sun, the constellation Ophiuchus is also eligible for being a part of zodiacs and in fact it really is. Astronomers always regard it as a zodiac constellation but astrologers have forgotten Ophiuchus because they divide the whole sky of 360 degrees in 12 equal parts of 30 degrees each, therefore there is no room for Ophiuchus in zodiacs, even though it is a part of it. This once again is a demolition of scientific fact. It is in a complete disagreement with what science is telling us now. So we can surely say that Astrology is an “Unscientific Science” having no scientific roots. 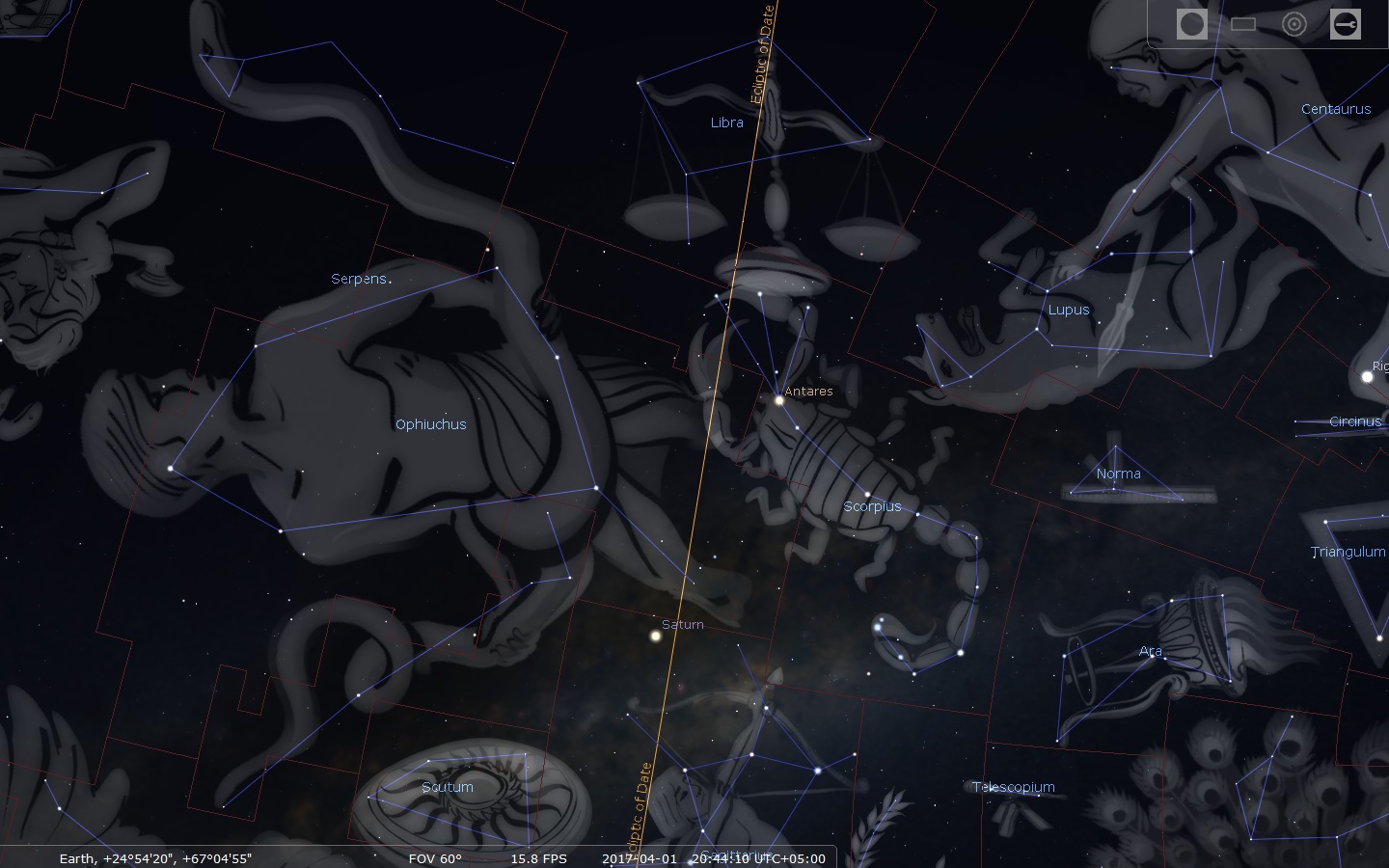 The line of Ecliptic passing through the Constellation Ophiuchus. 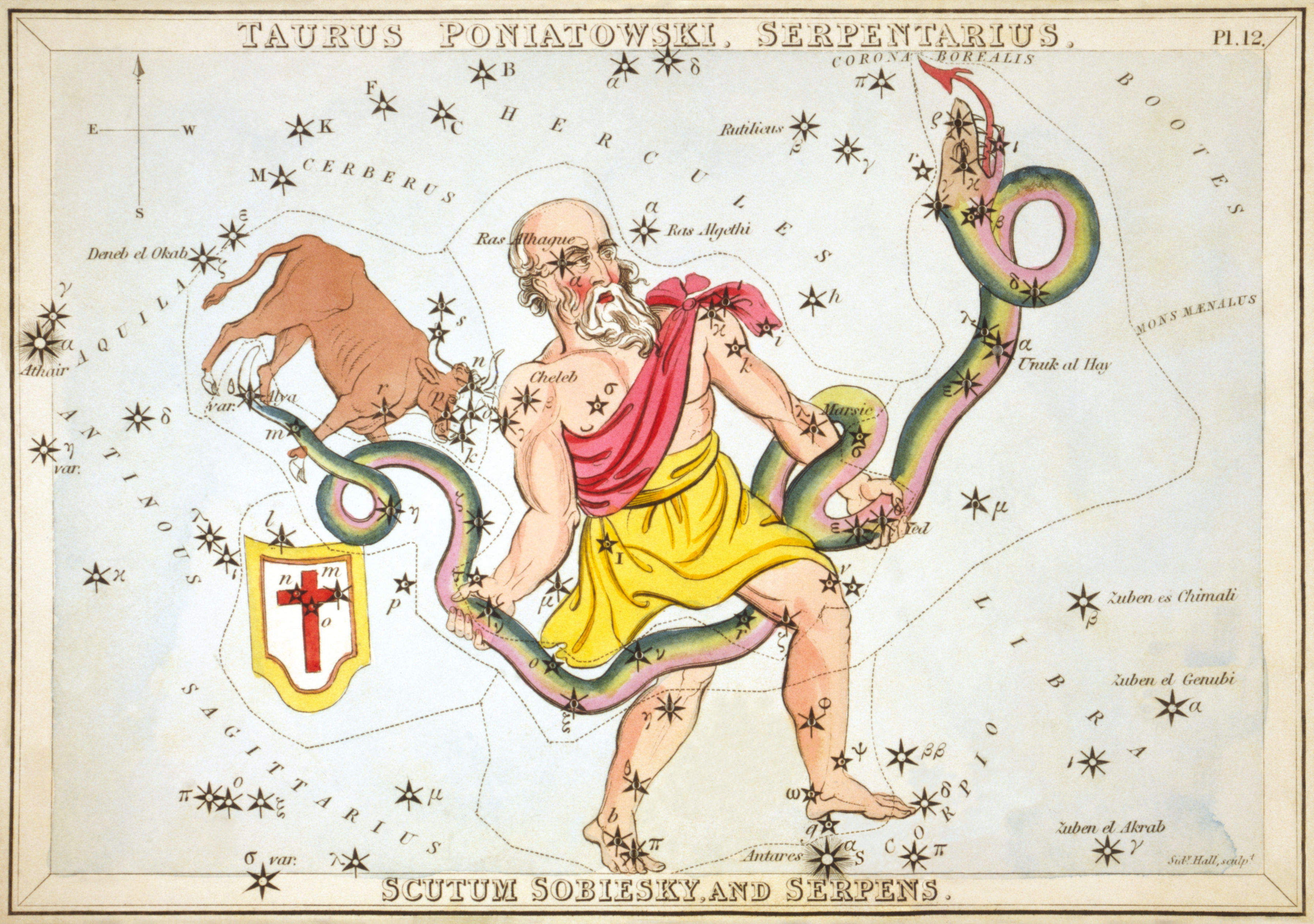 Constellation Ophiuchus as depicted in Urania’s Mirror, a set of cards published in London in 1825.

You can be sure that the sign which you were told from your birth is not the right one, except for a few people. You can continue to take the unscientific route of Astrology and proclaim yourself the same sign as it was 2500 years ago, or you can choose to accept the truth and welcome your new sign.

This change of zodiacs did not happen overnight. In fact, it took 3 millenniums to reach at this point. In 23,200 years, I will once again become a Scorpion. Until then, I can only wait, and prove to be a good Libra.