All Night Astronomy At CATI

I was sleeping in the morning, when I got up around 9 AM, I saw that there was a missed call by Omer bhai from Lahore. I wondered why a call from him so early in the morning.

I called him back. I didn’t have any idea what news was coming to me.
I got notified by Omer bhai that Mr. Khalid Marwat from Karachi is in Hyderabad with his telescopes. He told me that He will be at CATI, I didn’t have any idea what and where CATI is. Kept wondering whole day long about it. Finally in the evening I asked my father to take me there.

I called Mr. Marwat and asked him where he was in Hyderabad, He said “I am at Hyderabad Airport”. I was eager to join, and got to Hyderabad Airport by 9:30 PM with my family. The guards asked my name there, when I told them my name, they said Oh, please this way, Sir is waiting for you.

At the airport, I saw them sitting on the runway. I first saw Meade 8″. I thought that Mr. Marwat had only brought Meade. But when he said “look there” I saw the giant Obsession 18″ in the darkness, I got so much excited which I can not express in words.

The sky condition was not very good, but even then it was better than metropolitan skies.

First we talked about telescopes, stars, constellations, planetary motion and many other things. Mr. Marwat explained all the points very clearly. I liked his explanations a lot. Few people also joined after wards. The public was not much, there were about 15 people including me. And 2 scopes and a binoculars were too much for 15 people.

Mr. Marwat aligned his Obsession 18″ and showed us Saturn at 11x Magnification. Unfortunately, the collimation of the Obsession was greatly disturbed, so Saturn wasn’t looking impressive, but even then it was very beautiful. Then we observed a double star in Ursa Major. By that time, Meade was pointed towards Mars and people enjoyed looking at Mars.

Then Mr. Marwat showed me Open Cluster M35 through the Meade. It was a very crisp view. I loved it alot.

At 12:00 AM, The Date Changed. And people started to leave for their homes. They had a car’s lights turned on for some Mobile Phone Flashless Photography. My sister also photographed me with Obsession 18″. Then all the people left except Me and my Family.

I was looking at heavens through the Obsession 18″. My family kept asking me to leave because it was so late by then. I said, ok 10 minutes, ok 5 minutes, ok just this last object 🙂 So my Mom asked me whether you want to go to home or not. I was waiting for this question and immediately said “No Mom, I wanna stay here whole night”. Thankfully, my parents agreed.

Mr. Marwat gave me his Sky & Telescope jacket because of plenty of mosquitoes. I also tied a handkerchief on my head because I had no hair and mosquitoes were attacking from all directions.

My family also left at 12:30 and left me at CATI. Then I and Mr. Marwat started some serious observations.

Since the Obsession’s collimation was disturbed, so we decided to collimate it first. I never even knew what collimation is and why it is needed. Mr. Marwat told me about it. And then I assisted him in collimating the scope. When it was collimated, we again went for Saturn at 35x and then at 115x. We got to see 3 moons of Saturn. Saturn was looking just like a Yellow Cham Cham.

I then requested Mr. Marwat to show the Sombrero Galaxy, He said OK lets hunt Sombrero. And my this request wasted 1 precious hour. Sombrero was playing Hide ‘n Seek with us. Couldn’t find it after many tries. But in the 2nd hour we finally got it. Cool view. Really liked it a lot.

Throughout the night, the security guards kept sleeping near the telescopes. After a quarter hour or so, one of them would wake up and ask, Sir are you still awake? And then again he would sleep.

Then I turned Obsession towards Mars. It was bright red object moving fastly through field of view. The magnification was lower so I couldn’t see much details.

Due to plenty of dew, Meade was packed up.

Observed Albireo too. Albireo appears to be a single star through naked eye, but it can be resolved into a double star.

Then I turned Obsession towards my own Zodiac, Scorpio. Antares was looking awesome in telescope. Moving some down from Antares, found M6 and M7. Tried much to find M4 but couldn’t do it from Obsession. Held Nikon 7×50 and tried to find M4 and this time I was able to locate it.

One thing I liked about Obsession 18″ was the ease of handling it. This is a giant telescope but one can very easily handle it and use it to find any object in the sky.

Then we turned towards the Ring Nebula near Vega. It was looking very great and I also got some hints of colors in it. The centre of the nebula was looking blue while the outer part was appearing to be pink.

We also tried to find Whirlpool Galaxy, 3 hops to west from Merak, and 2.5 hops to south. Found but disappointing view.

At about 5 AM, Mr. Marwat showed me Milky Way’s arm in Sagittarius. Then I made to “Double Double” myself, asked Mr. Marwat about it and he showed me D.D in telescope. Can’t forget that view.

Then Mr. Marwat pointed his laser towards the location of The Coathanger, I saw it in 7×50, Ah, what a view it was. A really nice view, it seemed like I was looking at a hanger in reality and not at stars.

At 5:35 AM, I sat in the back trunk of Mr. Marwat’s car and noted the objects observed.

Mr. Marwat then marked the session end by photographing the Sun. 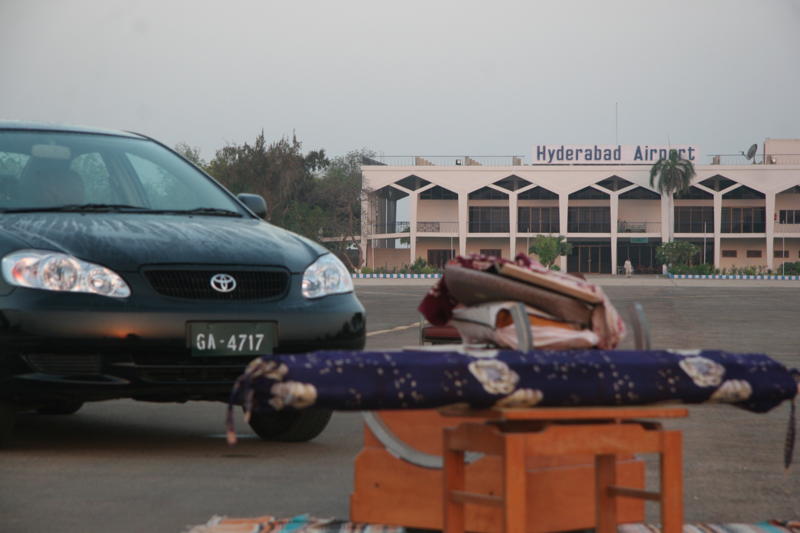 Venue - The Hyderabad Airport - The rising Sun is seen in the bumper of the car.

Packed up the telescopes and left the runway at 6:58. At 7:00 AM, I finally came to know that CATI stands for Civil Aviation Training Institute.

Got freshen up in CAA guest house. Had breakfast. On breakfast table, discussed toooooooo much Astronomy and telescope making with Mr. Marwat.

What a great night it was. A trip to heavens with 18″ scope was an experience which I can never forget. Thanks to Mr. Khalid Marwat. 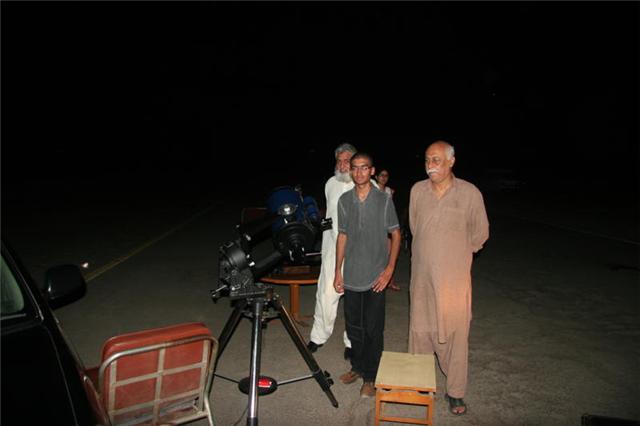 My father in white, Me, Mr. Qaisar and Meade 8"

2 Unknown People, Mr. Qaisar, Me, My Father and the Obsession 18"